To try, even when something is challenging.

How to Achieve this in the Classroom

Do not give up on any learning task! Your learning is designed to feel challenging and making mistakes is a really important part of the journey.

Ask for help and for feedback.

Look at your previous learning experiences; are there any skills that you can use to help you through this next challenge?

How to Achieve this around your School and Local Community

Join at least one club, especially if it links directly to your ASPIRE Sentence!

Learn a new skill, such as baking, drawing or participating in a sport.

Set yourself a challenge that you can face over time, such as walking or running to a certain distance.

Seize the opportunity to take part in the Duke of Edinburgh programme. 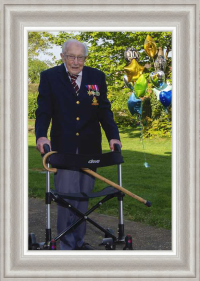 Captain Sir Thomas Moore was an ex army officer in the Second World War. In 2020, just before his 100th birthday, he chose to walk one hundred lengths of his garden in aid of NHS Charities Together in order to provide support during the pandemic, with the goal of raising £1,000. His efforts and resilience inspired people around the UK, and he recieved 1.5 million individual donations! In recognition of his efforts, he received the BBC Sports Personality of the Year Helen Rollason Award. By his 100th birthday, he had raised over £30 million for the NHS Charities.